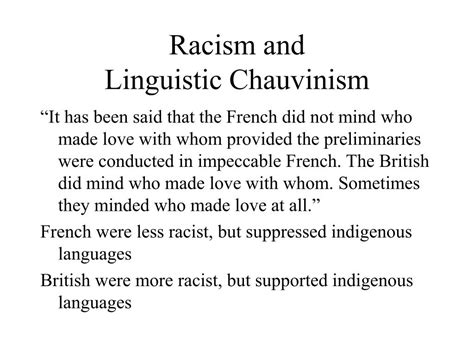 What Is The Meaning Of Linguistic Chauvinism?

What is the Meaning of Linguistic Chauvinism?

Linguistic chauvinism is a term used to describe an attitude of superiority held by one language or dialect over another. It is a form of linguistic prejudice and discrimination based on perceived linguistic differences. It can be seen in a variety of contexts, from the way certain languages are taught in school to the way they are used in public discourse. Linguistic chauvinism is often linked to a sense of nationalism or cultural identity, and can be used to support political movements or policies.

Linguistic chauvinism has a long and varied history, but is most commonly associated with the rise of modern nationalism in the 19th and early 20th centuries. As nations sought to define themselves in an increasingly globalized world, language was often used as a marker of national identity. The promotion of one language over another was seen as a way to promote a sense of national unity and superiority. This led to a rise in linguistic chauvinism, with governments and educational systems promoting one language as the “right” one to learn and speak.

One of the most common examples of linguistic chauvinism can be seen in the education system. In many countries, only one language is taught in public schools and universities, while other languages are ignored or marginalized. This can lead to a lack of access to education for those who speak minority languages, as well as a lack of respect for those languages in the larger society. Linguistic chauvinism can also be seen in public discourse, in which speakers of one language are seen as more intelligent or sophisticated than those who speak a different language.

Linguistic chauvinism can have a negative impact on both individuals and societies. Those who are not native speakers of the “right” language can be excluded from certain educational or professional opportunities and may feel a sense of inferiority. This can lead to feelings of exclusion, alienation, and even resentment towards those who are seen as “superior” due to their language. At a societal level, linguistic chauvinism can lead to a lack of appreciation for diversity and can put minority languages at risk of extinction.

In 2023, it is more important than ever to challenge linguistic chauvinism and promote linguistic diversity. Governments and educational institutions should work to promote a more inclusive approach to language and offer equal access to education for all speakers, regardless of their native language. There should also be an effort to promote public discourse that recognizes the value and richness of all languages, rather than privileging one language over another.

Previous What Is A Condensation Polymer?
Next Harness The Power Of Python Notebook Extensions In 2023